The Bucs’ season fate comes down to three games. They’ve stumbled to a 6-8 record in 14 games, but thanks to playing in a weak NFC South, they still lead the division by a game and are in control of their own destiny.

There are still three games left – and those three games are the last chance for the Bucs to make something of this season. As tumultuous as this calendar year and next season has been, Tampa Bay is in its end game. This is not the ultimate endgame that the NFL Playoffs are. The Bucs need to get things done here before they even think about it. But if Todd Bowles’ team plays well in these three games, maintains the division lead and hosts a playoff game on Wild Card Weekend, then anything can happen.

“The interesting thing is there’s no lack of confidence,” quarterback Tom Brady said Thursday. “It’s just a lack of execution and our ability to do it consistently, and I think the ability to do it is one thing, but to do it consistently well was a problem. There are spurts where it’s been good and we can do a lot of things the right way, and there are other times where we haven’t, leading up to where our record stands.

“I think the point is, we’re 15, 16 weeks into the season, including the bye, and the whole season comes down to three really important games. And this is the first of three and we’re going to be fighting our asses off to try and get it done.”

Tampa Bay will be in Arizona on Christmas night for the opener of this three-game stretch. It’s a big chance, as a win over the 4-10 Cardinals on Sunday night would take the Bucs to 7-8, plus it would create the opportunity to reach the division with a win over the Panthers at home next week.

“Everything is still ahead of us – we are trying to win the division, we have to take care of ourselves,” said Bowles. “We don’t need to see anyone else. We know what we have to do.”

As far as possible winning the division with a 9-8 or sub-.500 record, Bowles said it doesn’t matter. He’s not wrong, to be fair, as Tampa Bay has only six division championships in its history, which began in 1976.

For the 6-8 Bucs, it’s about moving forward The Bucs are certainly not where they want to be, at least not on record. Ideally, they would have finished the division by now and shifted their focus to earning the top seed in the NFC and a first-round bye.

But the reality is very different. The reality is that the Bucs are lucky that their division mates have even worse years than them. That’s why Tampa Bay, at 6-8, is still making its own destiny. This team has not earned that right, but that doesn’t mean it won’t take advantage of it and try its best to move forward, play better ball and make some noise on the stretch.

“We can’t do anything about the past, so we’re further than we would have liked,” Brady said. “We are where we are. We wish we won every game, I certainly do, but we didn’t deserve it. If you don’t deserve it, what do you expect? We need to try to earn it this week and hopefully take all the lessons from 14 games and apply them this week.

“When we are on the road, there are times when we have done a good job. We did a good job in the first few weeks of the year. We went to Germany and had a great time. There haven’t been many other times where we’ve really done that well. Some challenges only at Christmas and stuff, but we have to put them aside and try to win a match.

As frustrating as the Bucs’ up-and-down season has been, the next three games still offer them a chance to win their second straight division title. From there, they’ll try to get hot at the right time and run to their second Super Bowl in three years.

Our whole season is ahead of us. We’ve all worked hard to get to this point,” said Brady. [To] try to figure out how to get a win, I’m sure it would feel really good, but again, we’ve got to go out there and we’ve got to earn it because those teams are definitely not going to give it to us just like that.” 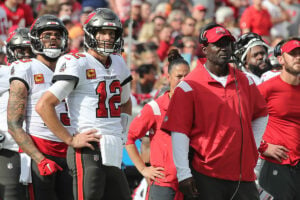